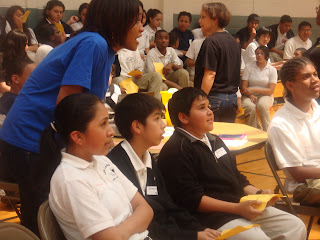 That's Riche in the blue T-shirt!  An Ivy League attorney-turned-social entrepreneur, Riche has over fifteen years of experience working in education and on education policy-related initiatives.
In 2002, Riche returned to her hometown of  Prince George’s County, MD to honor the last wish of her grandfather, who asked her to spend time at home thinking about what she really wanted to do with her life and how she could give back to her community at the same time. Among all the interesting things Riche did during her break, she discovered that education was an area in which she could make a significant impact. As an SAT instructor for a national company in a neighboring county, Riche witnessed firsthand how existing models of test prep could help some students, but at the same time, leave many others behind.
Out of frustration, grew inspiration: Riche founded IST in 2003 to provide high-quality, results-based standardized test prep and educational services to students of all academic, economic and cultural backgrounds.  Staying true to her grandfather's wish, Riche started IST in her own community and then grew it to gain national and international presence, positively impacting the academic lives of thousands of students.  As President, Riche guides IST’s overall direction and strategic visioning.  As Chief Academic Officer, she trains and directs the instructional team, oversees curriculum development and manages custom design projects.  Through her work in both capacities, Riche is frequently invited to address audiences across the country on relevant topics in education and education policy.
In addition to IST’s corporate office in the Washington, DC metropolitan area, Riche manages affiliate offices in Atlanta, Los Angeles and London.  She also serves as Education Policy Advisor to Delegate Jay Walker of the 26th Legislative District of Maryland, counseling him on all educated-related matters.  In 2007, Riche co-founded LevelTen, a non-profit focused on closing the nation's achievement gap through innovative academic programming and community mobilization.
Prior to IST, Riche managed the Harlem Tutorial Program, an initiative designed to provide tutoring and academic enrichment to junior high school students in New York City.  Combining her interests, Riche later taught high school students about law when she worked with the College Bound Program of Legal Outreach, Inc. in New York and the National Youth Leadership Forum on Law in Washington, DC.  She is proficient in Spanish and taught English as a Second Language to native speakers of Spanish and Portuguese in Providence, Rhode Island.  Riche is also a highly sought-after private tutor for the New York, Texas, Maryland and Arkansas bar examinations.
Additionally, Riche has worked for Morrison and Foerster LLP law offices in Los Angeles and New York, the legal department of the Solomon R. Guggenheim Museum in New York, the Office of the State’s Attorney for Prince George’s County, Maryland and the Committee for Economic Development in Washington, DC.
Riche is a product of Prince George’s County Public Schools, where she graduated from the prestigious Science and Technology Center at Eleanor Roosevelt High School.  She is a graduate of Brown University, with a degree in Public Policy and American Institutions, which included a year abroad at the London School of Economics.  She obtained a Juris Doctor from Columbia University School of Law, which included a semester abroad at the University of London School of Oriental and African Studies.
Riche is a member of the New York and Maryland Bars, the Maryland Governor's Commission on Small Business, the University of Maryland Educational Talent Search Program Community Advisory Board, the Board of Directors of the William Van Dyke Minor, Jr. Educational Foundation and the Sky Walker Flight School, and the Voices of Diversity Speakers’ Bureau.  Keep up with Riche at www.RicheHolmesGrant.com.

A creative space for every student to learn, thrive and grow

Get your own widget